Almighty God, you called your deacon Laurence to serve you with deeds of love, and gave him the crown of martyrdom: Grant that we, following his example, may fulfill your commandments by defending and supporting the poor, and by loving you with all our hearts; through Jesus Christ our Lord, who lives and reigns with you and the Holy Spirit, one God, for ever and ever. Amen.

St. Laurence was one of the most popular saints of the Early Church and his popularity has lasted even to the present day. His tomb was a place of pilgrimage for the fourth century on, and the Emperor Constantine erected a chapel over the grave of Laurence; it is now the site of the church of St. Laurence-outside-the-Walls in Rome. What I like about St. Laurence was that he was a bit of a smart-aleck; when you read his story you will learn that he was not one to be overwhelmed with respect for the authority of the Roman Empire.

Laurence was one of seven Deacons in the Church in Rome; their Bishop was Pope Sixtus II, who was also martyred and is considered a saint. Deacon Laurence was in charge of the material goods of the Church, and he was also a kind of Church Archivist; he had a list of all the members of the church in Rome. In the year 258, during the reign of the Emperor Valerian, a persecution broke out in Rome. This persecution was directed primarily towards the clergy and the laity of the upper classes. All properties used by the Church were confiscated, and Christian assemblies were forbidden. On August 4, 258, Pope Sixtus and six of his deacons were apprehended in the catacombs. The catacombs were underground burial places, very much like caves, all connected by tunnels which extended for hundreds of miles, where the Christians buried their dead. They would also hold prayers for the dead in the catacombs and would celebrate the Eucharist in the catacombs on the anniversary of the death of a martyr. Pope Sixtus and six deacons were arrested and taken off to be executed. According to an account by St. Ambrose, the fourth century Bishop of Milan, when Laurence saw his bishop being taken away by the police, he followed him and called out to him, saying, "Father, where are you going without your son? Holy Priest, where are you hurrying to without your Deacon? You have never offered sacrifice without an attendant. Are you displeased with me, my Father? Have you found me unworthy? Prove, then, whether you have chosen a fitting servant. To him to whom you have trusted the distribution of the Savior's blood, to him whom you have granted fellowship in the partaking of the Sacraments, why do you refuse this person a part in your death?" Pope Sixtus replied, "I am not leaving you or forsaking you. Greater struggles yet await you. We old men have to undergo an easier fight; a more glorious triumph over the Tyrant awaits you, young man. Don't cry; after three days you will follow me." Pope Sixtus II and four deacons were martyred in the catacombs. 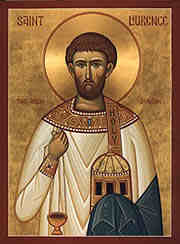 The Prefect of Rome had heard that the Church in Rome had a huge treasure hidden away and he wanted it to pay his soldiers. He ordered Laurence to bring the treasure of the Church to him. Laurence told him that it would take three days to gather the treasure together, and the Prefect gave him that much time. Laurence went throughout the city, gathering up the poor, the crippled, the blind, the widows and orphans that the Church supported. Three days later Laurence assembled them all in front of the palace of the Prefect, and then called him out "to see the wondrous riches of our God." When the Prefect saw the poor and ill before him, he was not amused. He ordered that Laurence be executed. A huge grill was prepared over a slow coal fire so that the execution would be slow and painful. Laurence was tied to the grill and put over the fire. As is often the case with the martyrs, his love for Christ filled him with strength and he lasted a long time; in fact, at one point he said, "Turn me over; I'm done on this side!" Just before he died, he said, "It's cooked enough now." He then prayed that the city of Rome would be converted and that the message of Christ would spread throughout the world. He perfected his martyrdom on August 10, 258.

One of the earliest documents commemorating the martyrdom of St. Laurence is the Hymn in Honor of the Passion of the Blessed Martyr Laurence composed in the year 405 by Aurelius Prudentius Clemens, a Christian from Spain. However, the account by St. Ambrose of Milan is earlier and is part of a treatise he wrote in the year 391 entitled On the Duties of the Clergy. but Prudentius' account is more complete. Let me share some of it with you:
First of the seven ministers, who nearest to the altar stand,
Levite in holy orders high and eminent above the rest.
He guarded well the sacred rites and kept in trust with faithful keys
The precious treasure of the Church, dispensing riches vowed to God.
The comes the section on Sixtus:
The Pontiff Sixtus, from the cross, on which he hung saw at its foot
His deacon Laurence weeping sore, and these prophetic words he spoke:
"Let tears of sorrow cease to flow at my departure from this life;
My brother, I but lead the way, and you will follow in three days."
Here are the stanzas about Laurence and the Prefect:
"Our church is very rich," he said, "I must confess that it has wealth;
Our treasuries are filled with gold not found elsewhere in all the world."
He hastens through the city streets, and in three days he gathers up
The poor and sick, a mighty throng of all in need of kindly alms.
He sought in every public square the needy who were wont to be
Fed from the stores of Mother Church and he as steward knew them well.

The Prefect deigns to follow him; the sacred portal soon they reach,
Where stands a ghastly multitude of poor drawn up in grim array.
The air is rent with cries for alms; the Prefect shudders in dismay,
And turns on Laurence glaring eyes, with threats of dreadful punishment.
"These poor of ours are sick and lame, but beautiful and whole within.
They bare with them a spirit fair and free from taint and misery.

These humble paupers you despise and look upon as vile outcasts,
Their ulcerous limbs will lay aside and put on bodies incorrupt.
When freed at last from tainted flesh their souls, from chains of earth released,
Will shine resplendent with new life in their celestial fatherland.
Not foul and shabby or infirm as now they seem to scornful eyes,
But fair, in radiant vesture clad, with crowns of gold upon their heads."

As I said earlier, the Prefect was not amused by Laurence's little joke and ordered that Laurence be executed:
Thus spoke the Prefect, at his nod forthwith the executioner
Stripped off the holy martyr's robes and laid him bound upon the pyre.

Prudentius says that the martyr's face was luminous and that it shone a glorious light that was only noticed by the baptized.
The poet then presents the final moments of the life of St. Laurence:
When slow, consuming heat had seared the flesh of Laurence for a space,
He calmly from his gridiron made this terse proposal to the judge:
"Pray turn my body, on one side already broiled sufficiently,
And see how well your Vulcan's fire has wrought its cruel punishment."

The Prefect bade him to be turned. Then Laurence spoke: "I am well baked,
And whether better cooked or raw, make trial by a taste of me."
He said these words in way of jest; Then rising shining eyes to heaven
And sighing deeply, thus he prayed with pity for unholy Rome.

Thus ended Laurence's fervent prayer, thus ended, too, his earthly life:
With these last words his eager soul escaped with joy from carnal chains.
Some noble Romans, who were led by his amazing fortitude
To faith in Christ, then bore away the hero's body from the scene.

In his second letter to the Christians in Corinth, St. Paul said, "The point is this: those who sow sparingly will also reap sparingly, and those who sow bountifully will also reap bountifully. Each one must do as they have made up their minds to do..." Laurence made up his mind to serve Christ, to care for the sick, the poor, the hungry, and the naked, and he saw them not as the needy, but as the treasure of the Church. He did sow bountifully, and his witness unto death made a profound impression on many in Rome. His prayer for the conversion of Rome was answered when, in a mere seventy or so years after his martyrdom, the Emperor Constantine issued the Edict of Toleration and began to show favor upon the Church and the persecutions, at least in Rome, ended. May we all have the eyes of St. Laurence and see the poor as the "wondrous treasure of our God." 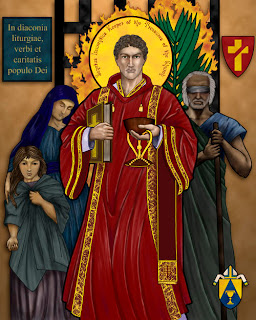 St. Laurence, Super Hero!
Posted by Padre Mickey at 10:34 AM