As is usually the situation with the members of Jesus' family, we know very little about Joseph. The gospel texts tell us that he was a carpenter, that he was a descendant of David the king, and we know that he had to go to Bethlehem for the census. We know that he was betrothed to Mary and wasn't too sure about things when he learned that she was with child, and we also know that he was still around when Jesus was twelve years old. Everything else is a guess and is usually something someone made up for a theological or dogmatic reason.

One thing we know about Joseph is that he was obedient; even when he had his doubts about the marriage and his young bride, when angels would appear to him in his dreams and give him instructions, he would follow them. He married Mary even though she was pregnant, and he took his young wife and baby son to Egypt when instructed by an angel in order to save them from the wrath of Herod. We know that Joseph was a devout Jew and that he brought his family to Jerusalem to sacrifice at the Temple. These are the only stories we have from the Bible. But many traditions sprang up involving Joseph over the centuries. There is a tradition that Joseph was an elderly man when he wed Mary. This tradition was probably invented as a means of preventing some from thinking that Joseph was the biological father of Jesus. If Joseph was an elderly man then he probably had lost all interest in sex by the time he and Mary were wed, so he couldn't possibly be Jesus' biological father; plus Mary could remain ever-virgin! There is another tradition that Joseph was a widower and that his marriage to the Blessed Virgin Mary was his second marriage. This idea may have been developed as a means of explaining all those brothers and sisters of Jesus; if Mary was ever-virgin, those other kids must be step-children. Personally, I don't accept those stories; I thin that Joseph was probably in his twenties when he married Mary, and I think that they had at least four sons together and several daughters, too. He isn't mentioned in the texts after the visit of Jesus to his home town because he was no longer important to the story. The Gospels are not histories in the same sense as a book about the building of the Canal is a history; the purpose of the Gospels is to tell the Good News and they are theological documents serving a theological purpose, not an accurate history as we modern people expect in a historic document. 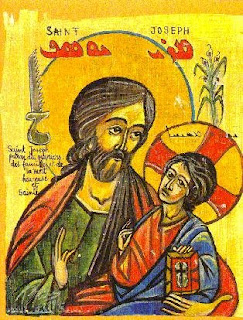 Today's Gospel reading gives us the only story from a canonical source on the childhood of Jesus. There are several non-canonical sources on his childhood and we call them infancy gospels. This story from Luke's gospel is the only story as such in the Bible. In this story Jesus is very precocious, telling his family that he must be about his Father's business. When I head this story as a child, I always liked it because the child Jesus showed-up all the adults, but as a father I have a lot of sympathy for Joseph and Mary, as I know what it is like to raise a precocious child. Raising precocious children can be difficult, but imagine how difficult it must have been to raise the Incarnation! In this story Joseph and Mary noticed that Jesus was missing, they've gone all the way back to Jerusalem to find him sitting in the Temple teaching the Scribes and Pharisees and Teachers, and he doesn't even feel bad about worrying his parents. When his mother scolds him, he says, "Why were you searching for me? Don't you know that I must be in my Father's house?" In the infancy gospels little Jesus turns children who make fun of him into goats and he even raises a child from the dead to clear himself from the accusation that he had pushed the boy off a tower. Raising little Jesus must have been quite a task! Actually, I think that Jesus was probably more like all the other children in the neighborhood; I doubt that he was turning other children into goats and I'm sure he didn't spend his time doing magic tricks. He probably helped his father and learned about carpentry, and he probably helped his mother take care of his younger brothers and sisters. I'm sure that the family of Joseph and Mary and Jesus and his siblings was as normal as all the other families living in Nazareth, a rather typical Galilean family.

Joseph is very important because he gave Jesus and James and Judas and the other children the fatherly influence that they needed to grow up to be the adults God wanted them to be. Joseph must have been a good, loving father, because the image of the father in Jesus' teachings is that of a loving, caring person. There are many people in the world who do not have good fathers; their fathers are uncaring and abusive, and this affects a person's perception of a father and it makes the name "Father" for God a problem, because when these people hear the word "father," they experience fear or loathing. But Jesus understood the word "father" to be a positive word. For Jesus the image of a father is that of a loving, caring, welcoming person and I'm sure that this image had a lot to do with his experience of his earthly father, Joseph. 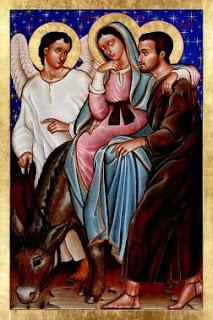 Joseph was willing to take Mary as his wife even though her condition could bring scandal upon his name. Joseph was willing to pick-up and head for Egypt for a few years in order to protect his wife and infant son. He returned to Galilee, to Nazareth, and there he raised a family and worked as a carpenter and was a model of fatherhood for Jesus and his brothers and sisters. Joseph is a model of dedication and obedience; obedience to God and dedication to his family, and that is why we honor his memory today.

O God, who from the family of your servant David raised up Joseph to be the guardian of your incarnate Son and the spouse of his virgin mother: Give us grace to imitate his uprightness of life and his obedience to your commands; through Jesus Christ our Lord, who lives and reigns with you and the Holy Spirit, one God, for ever and ever. Amen.
Posted by Padre Mickey at 3:00 AM