According to tradition, James travelled, as did the rest of the Apostles, and he is supposed to have gone all the way to Spain to preach the Good News of forgiveness of sins and the coming of the Reign of God, but this claim doesn’t really hold up to historical scrutiny. This claim has been around since the seventh century, and the Spanish claim that his body was transferred to Santiago de Campostela, and, since the Middle Ages, Santiago has been a popular saint in España.

The mother of the Thunder Boys asked that they sit on Jesus’ right and left, and they both said that they would drink of the same cup as Jesus, which was a reference to his suffering and death. We know that James did drink of the same cup as Jesus; James was one of the first of the Twelve to be martyred. He was put to death by Herod, according to the account in the Acts of the Apostles, and when Herod saw that this pleased the enemies of The Way, he also had Peter arrested. These actions continued the persecutions which started with the martyrdom of the Deacon Stephen. James was very much like his brother, John; they were both hot-headed and zealous, but they were willing to do anything for their Lord, and they were both important in starting that community which would become the Church. James drank of the same cup as his Lord, even though he had no guarantee that he would sit on the right or left of his Lord in the Kingdom, and, like all the martyrs, he was a witness of the power of God. I think that James the Great is another example of God working through people we would least expect to be God’s instrument. Here was a fisherman, possibly uneducated, who said “yes” to god’s call and whose life is now an example to us all. He witnessed miracles, he saw the transfigured Christ with Moses and Elijah, he saw the daughter of Jarius brought back from the gates of death, yet he still slept while Jesus prayed in the garden, and he disappeared with the others once Jesus was arrested. Yet, the miracle of the Resurrection and the baptism of the Holy Spirit gave him the strength to travel and preach the Good News, whether he went to Spain or not. And he finally had the strength to die as a witness for his Lord.

The saints are models for us all. We don’t consider them intercessors, we don’t pray to them, but we look a their lives as examples for us of what can happen when one allows the Holy Spirit to work through us. James did serve the Twelve, and for that reason we call him The great. May the life of St. James the Great help us remember that if we are to be first in the Reign of God, we are to be servants to all. 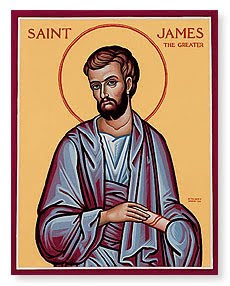 Apendix Here's what our pal Jacobus de Voragine, author of the Legende Aurea (you remember him from the St. Mary of Magdala post the other day) wrote about the translation fo the body of the Apostle James, Son of Zebedee, to Campostela in Spain:

...after the apostle's death, his disciples, in fear of the Jews, placed his body in a boat at night, embarked with him, although the boat had neither rudder not steersman, and set sail, trusting to the providence of God to determine the place of his burial. And the angels guided the boat to the shores of Galicia in Spain, where there was a queen whose name was Lupa, a name which means she-wolf, and which she well deserved by her life.

The disciples laid the body of the apostle on a great stone, which immediately softened as if it were wax, and shaped itself into a sarcophagus fitted to his body. The disciples went to Queen Lupa and said to her: "Our Lord Jesus Christ sends thee the body of His disciple, that thou mayest welcome in death him whom thou wouldst not welcome alive!" And they narrated to her the miracle whereby they had come thither without a rudder nor a steersman, and besought her to appoint a place for the burial of the saint.

Then, as John Beleth relates, she guilefully sent them to the king of Spain, a most cruel man, with the pretext of seeking his permission for the saint's burial; and the king arrested them and threw them into prison. But in the night, when he had gone to rest, an angel opened the prison doors and set them free. As soon as he learned this, the king sent soldiers in pursuit of them; but just as these soldiers were crossing a bridge, the bridge collapsed and the soldiers were drowned. At this report, the king feared for himself and his people, and repented. He sent other men to search for James's disciples, and to say to them that if they would return, he would refuse them nothing that they asked. They therefore went back, and converted the whole city to the faith of Christ. Then they returned to Lupa, to make known to her the kings's assent. The queen was sore distraught at these tidings, and answered: "I have oxen in a mountain place. Take them and yoke them, and carry your master's body whither you will, and build him a tomb!" All this she said in wolfish cunning, for she knew that the oxen were really untamed and savage bulls, and thus she thought that they could not be yoked or harnessed, or if they were harnessed, they would run away, and destroy the car and throw the body to the ground, and kill the disciples.

But no guile avails against God. The disciples, unaware of the queen's ruse, went up into the mountain, where first they encountered a dragon which belched fire; but they held a cross before him, and he was cloven asunder. Then they made the sign of the cross over the bulls, and they became as meek as lambs, allowed themselves to be yoked, and although no man guide them, they drew the saint's body, with the stone in which it was laid, straight into the middle of the queen's palace. Seeing this, the queen was dismayed, believed in Christ, transformed her palace into a church of Saint James, and endowed it munificently. And she passed the rest of her life in doing good works. 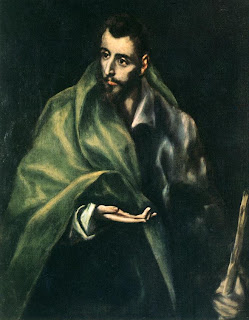