¡Feliz Día de Madres a todos mis amigas en Costa Rica!
I don't believe in a three-tiered universe, and I don't believe in the literal interpretations of the Ascension. I don't believe in the Assumption; I prefer the term "the dormition." However, I have no problem at all with honoring the Theotokus (my Nestorian tendencies aside). Instead of writing a hagiography today, I'll share some poems and paintings I've found in the intertubes.

O God, you have taken to yourself the blessed Virgin Mary, mother of your incarnate Son: Grant that we, who have been redeemed by his blood, may share with her the glory of your eternal kingdom; through Jesus Christ our Lord, who lives and reigns with you, in the unity of the Holy Spirit, one God, now and for ever. Amen. 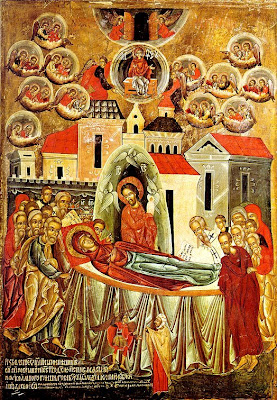 The Dormition of the Theotokus

Mary's Assumption
There was silence in heaven, as if for half an hour-
Isaiah's coals of wonder sealed the lips
Of Seraph, Principality and Power,
Of all the nine angelic fellowships.

The archangels, those sheer intelligences,
Were silent, with their eyes on heaven's door.
So must our fancy dower them with senses,
Make them incarnate in a metaphor.

There was silence in heaven as Mary entered in,
For even Gabriel had not foreseen
The glory of a soul immune from sin
Throned in the body of the angels' Queen.

Blessed be God and Mary in whose womb
Was woven God's incredible disguise.
She gave Our Lord His Body.
In the tomb  He gave her hers again and bade her rise.

Bright from death's slumber she arose, the flush
Of a chaste joy illumining her cheeks;
Among the motherless in heaven there was a hush
To hear the way a mother laughs and speaks.

Eye had not seen, nor ear of angel heard,
Nor heart conceived - until Our Lady's death -
What God for those that love Him had prepared
When heaven's synonym was Nazareth!

Her beauty opened slowly like a flower,
Beauty to them eternally bequeathed.
There was silence in heaven; as if for half an hour
No angel breathed.
Alfred Barrett (1906-1985)  Lentfoehr, Therese, editor. I Sing of a Maiden. New York: Macmillan Company, 1947. 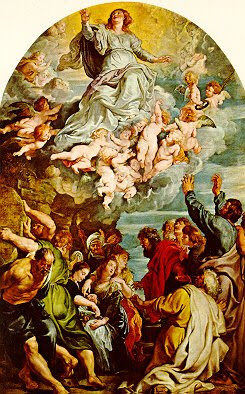 Memories of the Assumption
They bore her in a reverent group
To a holy place,
Left her body in the earth -
Her body, "full of grace".

But Thomas, tardy, slow of foot,
Absent when she died,
Spent with sorrow, craved to see
Her of the Crucified.

There was a swift intake of breath,
A hurried silent prayer:
Startled they opened the new-made tomb
To find but lilies there.
Sr. M. Angeline  Robert, Cyril. Our Lady's Praise in Poetry. Poughkeepsie, NY: Marist Press, 1944. 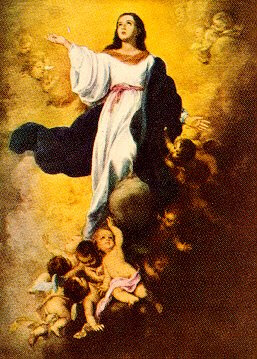 The Assumption
No painter ever caught the magic other going--
This was a matter of an inward growing,
Simple and imperceptible as thought.
It was no pageant wrought
Of sounding splendor, welter of gold bars
Of molten day, mad stars,
Flurry of quick angels' winging,
Bursts of their laughter ringing In wild bliss.
The simple fact is this:
Love conquered at long last.
Her eager soul fled fast
With a great gladness like a song
Unto to her Spouse above,
And her pure flesh would not be parted long
For sheer love.
by Joachim Smet O.Carm 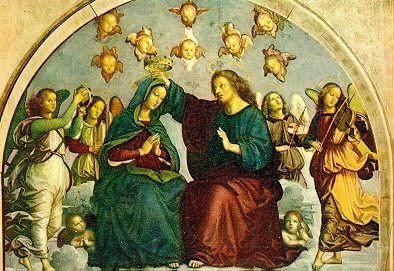 Raffaello. The Coronation of the Virgin
Posted by Padre Mickey at 8:58 AM