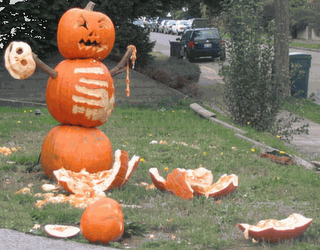 Geez Louise, I almost forgot!
We really don't celebrate this holiday here in Panamá. October 31 used to be Children's Day, which was changed to some day in July by our latest First Lady. Not much Trick or Treating, in fact, none here in Los Pinos. So it was easy for me to forget the holiday. Sinembargo, what a great Hallowe'en picture, verdad?
Posted by Padre Mickey at 6:58 PM No comments:

What do I mean by "blogging from the Global Center"?
Here is an article I wrote explaining Global Center.
It appeared in the October, 2006 issue of The Mission Bell,
the newpaper of my home diocese, El Camino Real.

During the month of August, Mona and I were in California, primarily to see our new granddaughter, Evelyn Sarah Mobley. We were able to visit our home parish of St. Francis in San Jose, and we also visited parishes in the dioceses of California and San Joaquín. We had a wonderful time seeing everyone, and we enjoyed talking about our ministry in Panama with the folks in all three dioceses, especially thanking them for their spiritual and financial support.

One topic which came up in all three dioceses concerned the present state of the Anglican Communion and the disagreements between the churches of the Global North and the Global South. I was surprised (and a little disappointed), to learn that most people were under the impression that the entire Communion was divided between these two poles. I was happy to tell folks about Global Center, a position which is explained in the Panama Declaration. It is my opinion that the position of Global Center is one of hope for the entire Anglican Communion.

First, some background. El Comisión de Educación Teológical para América Latina y el Caribe ( the Commission of Theological Education for Latin America and the Caribbean, or CETALC) held a conference on “Globalization and it Implications in Latin America” in Panama during the week of October 5 through 10, 2005. I was privileged to participate in this conference, and I was in charge of liturgies for the week. I also produced a “worship booklet” which contained the Holy Eucharist, Daily Morning Prayer, and Noonday Prayer in Spanish, English, French, and Brazilian Portuguese. I attended all the lectures and discussions during the week. I sat at a table with people from all over Latin America, including lay leaders from Colombia, Mexico, and Panama, seminarians from Cuba and Costa Rica, the Bishop of Western Mexico, the Bishop of Venezuela, and priests from Nicaragua, Haiti, and Mexico. We didn’t discuss the ordination of women or the consecration of the Bishop of New Hampshire or the Windsor Report; we did discuss the influences of globalization on our communities and nations and churches and how we battle poverty and political corruption. We discussed evangelization in a Latin American context and the effect of globalization upon our efforts in evangelization. We were from all over the map, both politically and theologically, but we were able to work together with love and respect through our unity as members of the Body of Christ.

One product of this conference is The Panama Declaration, which was issued by the Primates of Brazil, Mexico, and the Anglican Church in the Region of Central America (IARCA), as well as the bishops of those three provinces and the bishops of Haiti, the Virgin Islands, Province IX of the Episcopal Church (TEC), and Cuba (The bishops of Peru and Uruguay participated in the discussions but did not sign the document). In the opening paragraph, the bishops proclaim their unity:

"We, the Latin-American and Caribbean bishops, gathered in the context of the Anglican Theological Conference, proclaim our solidarity and make public our desire for unity in Christ who invites us to participate and seek perfect unity in
our Lord, Jesus Christ.*"

In the following two paragraphs, the bishops state that as a result of their reflections on the subject of Globalization and its implications and the challenges the Church faces in the reality of an economical system that directly influences the missionary work of the Latin American and Caribbean bishops, they want to express their commitment “to initiate an organizing process that will help us in the missionary expansion, common strengthening and joint reflection of the Church in the region of Latin America.” The bishops then explain the emphasis of this commitment:

". . . the renewal of respect to the plurality, diversity and inclusivity that have been a permanent sign of Anglicanism and our spirituality based on the Holy Scriptures, the Creeds, and the primary teachings of our doctrine."

The issue of polarization of biblical-theological trends in the Anglican Communion is then addressed. These trends, which have been labeled Global North and Global South, have grown over the past three years and the stridency and apparent irreconcilable character of the two groups in opposition has threatened the unity of the Anglican Communion. The bishops’ reaction to this situation is explained as follows:

"In the midst of the discussion, the Latin-American and Caribbean bishops feel the pressure of adopting either one of these positions. Nevertheless, we believe that neither one of the two alternatives represent our way of thinking, nor our spirit. For this reason we propose a trend which we refer to as Global Central, a position which encourages our Communion to rescue the participatory, diverse, tolerant and inclusive character that has identified us as the “via media” approach to Christianity during a great part of its history."

An invitation is then extended to other provinces in the Anglican Communion who do not identify with or fully fit in the present visions of Global North and Global South to join the Latin-American and Caribbean bishops and help “develop the vision of Global Center as we begin a journey on the path of reconciliation and bonding that will not allow the unity, as we know it, to be broken.”

The bishops have committed themselves to the revision of CALA, the Anglican Latin-American Council, an initiative created in 1987 during the celebration of the first Anglican Conference which brought together representatives from the laity and clergy throughout Latin America. The bishops believe that a Global Center perspective will help make CALA a reality. In order to do so they have committed themselves and their churches to strengthen the ties and strategies in use in their common ministries at present. The areas in which they will work together (using a Global Center perspective) are Theological Education, Communications, and coordination of efforts to meet and share information.

The last paragraphs deal with some issues which threaten unity, such as the exclusion of Provinces from Conferences (the Province of Brazil was excluded from the Global South Conference held in Alexandria, Egypt, by Archbishop Peter Akinola of Nigeria) and the disregard of authority and interference in jurisdictions among provinces (the bishop and some of the clergy of the Diocese of Recife in the Province of Brazil had been deposed by the Primate of Brazil and then received by the Primate of the Province of the Southern Cone). The final paragraph reads as follows:

"These acts of exclusion from events and the interference and disregard of authority in jurisdictions among Provinces, represent the breaking of agreements and commitments established between primates, and they are the product of the intolerant trends that we face and we hope that these trends will quickly disappear as a result of the inspiration and action of the Holy Spirit and our decisive actions towards change and renewal."

I find the position of Global Center to be one of great hope, because it offers one an opportunity to pull back from the two polarized positions. I have long felt as if I was caught in the middle of these issues. As a priest in the Episcopal Church, one may consider me a member of Global North, but I live and work in Panamá, which some may consider the Global South. I lived in Berkeley, California for five years, and I personally support the ordination of GLTB people, and defended the election and consecration of the Bishop of New Hampshire in discussions at the Clericus here in Panamá. That said, I also understand the resentment experienced in other Provinces of the Anglican Communion when it comes to issues which may have been discussed in the United States, Canada, and England for some thirty years but have yet to be addressed in Latin America and other parts of the Communion. I find that I have sympathy with and disagree with elements of both sides but can not align myself with either side. These issues which so polarize the North and South are not the issues of the Episcopal Church in Panamá, or of most of the Church in Latin America. I can only speak from my experience here in Panamá and Central America where we are dealing with issues of globalization and its effect on our economies, and we are also dealing with the survival of what is basically an immigrant church in countries dominated by the Roman Catholic Church while we are developing an Anglican identity in a Central American context. That is why Global Center, in my opinion, is the best position in our situation.

The Panama Declaration was issued in mid-October of 2005, but it seems to me that very few people in the United States (outside of the seminaries of the Episcopal Church) are even aware of its existence. Perhaps this is because it is not in the best interests of those who support the positions of either the Global North or Global South to acknowledge the existence of a document which is critical of both positions. But what I noticed in my conversations with people in the dioceses of El Camino Real, California, and San Joaquín, was their joy and relief in learning that there was an alternative to the more polarized positions. It is my experience that most people in the pews are not as involved with this battle; it seems to be more important to the clergy and lay leaders of some parishes and dioceses. People hear about the possibility of schism, and if one reads the various Episcopal Blogs on the world wide web which discuss the subject, one might think that the end is already here, but I don’t think that is what most people are experiencing in their congregations. I find my self quite frustrated when readings blogs from the two poles as there is no acknowledgement of the Global Center. I wish I could say that the majority of the Anglican Communion has joined the Global Center position, but I can’t. It is a position which interests some Provinces in Asia, and it is the position of the majority of Anglicans in Latin America. I think that the more people learn about Global Center, it becomes an attractive position. I see it as very much a part of the tradition of ‘via media.’ The position of Global Center is a ray of hope for unity in the Anglican Communion shining from Panamá.

* All quotations from the Panama Declaration are my own translation from the original Spanish-language document.
Posted by Padre Mickey at 5:35 PM 2 comments:

Welcome to Padre Mickey's Dance Party!
I'm a priest of the Episcopal Church serving as a missionary in Panamá.
I hope to post about my experiences here, and about politics (both in Panamá and the U.S.)
religion in general and especially the Episcopal Church,
music and anything else that catches my fancy.
It's a goofy name for a blog but I'm a goofy guy.
Let's see what happens.
Posted by Padre Mickey at 5:23 PM 2 comments: