The Martyrs of Lyons

Grant, O Lord, that we who keep the feast of the holy martyrs Blandina and her companions may be rooted and grounded in love of you, and may endure the sufferings of this life for the glory that shall be revealed in us; through Jesus Christ our Lord, who lives and reigns with you and the Holy Spirit, one God, now and for ever. Amen. 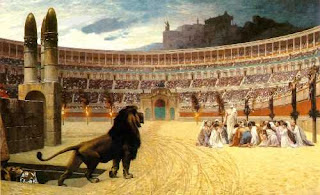 In the year 177 a persecution began in the Gallic cities of Vienne and Lyons. These two cities were missionary centers in Gaul and attracted Christians from Greece and Asia. The bishop in Lyons was Pothinus, an elderly man of great faith. Christians were being excluded from the social life of Vienne and Lyons and pagan mobs would throw stones and insults at them when they were seen in the market place or at the public baths. Because the Christian Eucharist was not open to outsiders, many stories spread about what went on in these gatherings. Stories spread that Christians were eating the flesh and drinking the blood of babies, who they had rolled in flour before killing them. Another story was that they would hold meals with dogs tied to candle sticks (probably large menorahs). According to the stories floating about town, at one point in the meal, the celebrant would throw some meat to the dogs, who would them lunge for the meat and pull down the menorahs, extinguishing them and in the resulting darkness, an orgy would take place, complete with incestuous acts. These stories made people think that Christians were a threat to the morals of the community so they encouraged their persecution. Really, no one wants incestuous cannibals in the neighborhood! After a while, Christians were banned from any public place in Lyons. If people saw Christians in a public place, they would curse them, beat them, drag them along the ground, stone them and imprison them. When they confessed Christ they were locked up in the Gaol and awaited the governor’s arrival.

This was very difficult for the Christians; some were strong but others just couldn’t take the pressure and would recant. There were others who were willing to be witnesses, to be martyrs for Christ. One day a group was brought before the governor: Sanctus, a deacon from Vienne; Maturus, a recently baptized Christian; Attalus, who had always been a pillar and support of the Church in his native Perganum; and Blandina, a female slave, who turned out to be the strongest of the group. When brought before the governor and accused, she said, “I am a Christian: we do nothing to be ashamed of.” Sanctus the deacon was a strong person, too. His torturers had hoped that they would be able to force him to say something improper; they would demand his name, race, an birthplace, or whether he was a slave or free, and to every question he replied: “I am a Christian.” When they ran out of ideas, they pressed red-hot copper plates against the most sensitive parts of his body. He stood strong, refusing to give in to them. His body was one huge bruise, but he still stood firm. After a few days they put him on the rack, hoping that this would break him. But instead of collapsing and giving in, Sanctus’ body became erect and straight and recovered its former appearance. One woman, Biblis had denied Christ, but was still tortured. While she was on the rack she came to her senses, coming out of a deep sleep and realizing that she was in danger of eternal punishment in hell. She said to the slanderers, “How could children be eaten by people who are not even allowed to eat the blood of brute beasts?” She joined the ranks of the martyrs. The bishop Ponthinus was over ninety years old and, of course, quite weak physically; he suffered problems with his breathing. He was brought to the governor before the entire populace of the city, with the crowd jeering and shouting at him. The governor asked him, “Who is the Christians’ God?” Ponthius answered, “If you are a fit person you will know!” He was dragged among the crowd, who rained blows upon his body and others throwing whatever they could find at him. They threw the barely breathing bishop into a dungeon, where he died two days later. Instead of scaring the others, his death inspired them to embrace the crown of martyrdom. Marturus, Sanctus, Attalus and Blandina were taken into the amphitheatre to face the wild beasts. There, in front of everyone, Maturus and Sanctus were taken through all manner of punishments, as if this was their first day in the arena. They ran the gauntlet of whips; they were mauled by the beasts; they endured every torment that the frenzied mob of the arena demanded. They were placed in iron chairs and their flesh roasted until people were suffocating from the stench, yet they heard nothing from Sanctus other than “I am a Christian.” Sanctus and Maturus finally expired, but Blandina was hung on a post and exposed as food for the wild beasts let into the arena. She looked to the others as if she was hanging on a cross, and her prayers and encouragement to the others inspired the others, who, in their agony, saw their Lord and Savior crucified for them, reminding them that anyone who suffered for the glory of Christ has fellowship forever with the living God. Since the beasts hadn’t eaten her yet, she was taken down from the pole and returned to the gaol for another day. Attalus had to walk about the arena wearing a placard which read This is Attalus the Christian while the crowd heaped its fury upon him. However, the governor learned that Attalus was a Roman citizen, and so he returned him to the gaol while awaiting instructions from Caesar. The witness of Blandina and Attalus inspired those who, in an earlier bout of weakness had denied Christ, returned and stood before the governor confessing their faith in Christ. Alexander, a doctor from Phrygia who had lived in Gaul for many years, returned to confess before the governor. The crowd was furious that someone who had recanted would now confess Christ, and they screamed at him. The governor made him come forward and asked who he was. Alexander answered, “A Christian.” This angered the governor and he was condemned to the beasts. The next day he was taken into the arena with Attalus. Once again, they endured the entire gauntlet of punishments. They died that day. Alexander didn’t make a sound, not even a groan, but communed with God in his heart. When Attalus was placed in the iron chair, he finally cried out while the smell of roasting flesh rose from his body, “Look! Eating men is what you are doing! We neither eat men nor indulge in any malpractices.” They asked him what name God answered to and he replied, “God hasn’t a name like a person.”

To top everything off, Blandina was returned to the arena with Ponticus, a youth of about fifteen years. They were forced to watch Attalus and Alexander being tortured and were constantly told to renounce the Lord, but they stood firm. Of course, this enraged the crowd, and the two were subject to all the tortures which Alexander and Attalus had suffered, and after each horror were commanded to recant, but they held firm. The crowd noticed that Blandina was encouraging Ponticus, and he bravely endured every punishment until he finally gave his spirit back to God. According to Irenaeus’ account, Last of all, like a noble mother who had encouraged her children and sent them before her in triumph to the King, blessed Blandina herself passed through all the ordeals of all her children and hastened to rejoin them, rejoicing and exulting at her departure as if invited to a wedding supper, not thrown to the beasts. Blandina suffered the whips, then the beasts, then the griddle, and then was finally dropped into a basket and thrown to a bull. She was tossed all over the arena, but was totally indifferent to it all; she was communing with Christ and preparing to be with Him. She, too, finally was sacrificed, and the crowd said that they had never known a woman suffer so much for so long.

One might think that this was enough for the crowd, but one would be wrong. Even though the martyrs were now all dead, they still vented their rage on their lifeless bodies. Those who had died in prison, such as Bishop Ponthius, bodies were thrown to the dogs, and the corpses watched day and night so that none of the Christians could take the bodies and bury them properly. Then they took the remains and burned them. Other bodies were left exposed to the elements, the heads removed from the torsos. These, too, were watched and a proper burial denied. After six days of being exposed to every kind of insult and to the open sky, the bodies were finally burnt to ashes and swept into the river, denying any burial. They did this because they thought that, by destroying the bodies, they would defeat God and rob the dead of their rebirth; ”in order that they may have no hope of resurrection, the belief that has led them to bring into this country a new foreign cult and treat torture with contempt, going willingly and cheerfully to their death. now let’s see if they’ll rise again, and if their god can help them and save them from our hands.” Bishop Eusebius, in his History of the Church, writes “So much may profitably be said about the affection of those blessed ones for their brothers who had fallen from grace, in view of the inhuman and merciless attitude of those who later behaved so harshly towards the members of Christ’s body.” Sanctus, Attalus, Alexander, Ponticus, Bishop Ponthius, Blandina and the others were true Christian soldiers, because they fought against the forces of evil which wanted to destroy the followers of Christ. Remember their witness next time you hear someone claiming persecution because they can’t pray at a High School football game or teach Bible stories in a Public School.
Posted by Padre Mickey at 9:27 AM No comments: