This is my sermon on St. John John, son of Zebedee and Salome and younger brother of James, grew up along the shores of the sea of Galilee. Both John and James were followers of John the Baptizer, and John and Andrew were present when John the Baptizer saw Jesus and said, “Behold the Lamb of God!” John was probably one of the earliest disciples of Jesus. Jesus called John and James “Boanerges” which means “Sons of Thunder” and they, along with Peter, where in the Inner Circle of the disciples. These three were blessed with the experience of seeing Jesus transfigured and talking with Moses and Elijah. When the women returned to tell the disciples of the empty tomb, both Peter and John ran to check out their story and John reached the empty tomb first. It was John who recognized the Resurrected Jesus sitting on the beach when they were fishing. According to the gospel attributed to John, Jesus gave the care of his mother, the Blessed Virgin Mary, to John as they stood at the foot of the cross. It was either James and John or their mother who asked Jesus if they could sit at his right and left when he entered his kingdom. We have no idea if they sit on either side of Jesus, but we do know that they shared the same cup as Jesus, the cup of persecution. James died the death of a martyr, but although John died in Ephesus at a very advanced age, he did suffer persecution. Tertullian and Jerome claim that during the persecution of Domatian, John was dipped in a cauldron of boiling oil outside the Latin Gate of the city of Rome. He was unharmed and was exiled to the island of Patmos to work in the mines. It was there that he received the vision which he wrote down and is named the Apocalypse of John the Divine, or the Book of Revelation.

John was the most prolific writer of the Twelve who followed Jesus; only the Apostle Paul left us more writings. John has a gospel attributed to him, the vision of the Apocalypse is attributed to him, and three letters to the Church in Ephesus are attributed to him. According to bishop Eusebius of Cesarea, the fourth century historian, John wrote his gospel because the other three gospels did not deal with the deeds of Jesus at the beginning of his ministry. Eusebius said that John’s gospel was accepted by the Church from the earliest days, as well as the first epistle attributed to him, but that the other two epistles are not accepted by everyone. There was still disagreement as to whether the Apocalypse should be accepted as scripture in the fourth century; Eusebius writes: “In regard to the Apocalypse, the opinions of most men are still divided.” As I mentioned earlier, John moved to Ephesus upon his release from Patmos, and he became a very important part of the Church in Asia. St. Jerome writes that towards the end of John’s life in Ephesus, he was so weak that he could no longer preach or even stand. His young disciples would carry him into the church and, with great difficulty, the Apostle would say: "My dear children, love one another." Some of those in the congregation once asked him why he always said the same thing, why he repeated the same words, and the Apostle answered, "Because it is the precept of the Lord, and if you comply with it, you do enough " He finally died in peace in Ephesus, at about ninety-four years of age. As far as we know, John is the only one of the Apostles who died of old age rather than receiving the crown of martyrdom.

I want to finish by relating a story about the Apostle which Eusebius credits to Clement of Alexandria. This story gives us great insight into the nature of John: "Listen to a tale, which is not a mere tale, but a narrative concerning John the apostle, which has been handed down and treasured up in memory. For when, after the tyrant's death, he returned from the isle of Patmos to Ephesus, he went away upon their invitation to the neighboring territories of the Gentiles, to appoint bishops in some places, in other places to set in order whole churches, elsewhere to choose to the ministry some one of those that were pointed out by the Spirit. When he had come to one of the cities not far away, and had consoled the brethren in other matters, he finally turned to the bishop that had been appointed, and seeing a youth of powerful physique, of pleasing appearance, and of ardent temperament, he said, 'This one I commit to thee in all earnestness in the presence of the Church and with Christ as witness.' And when the bishop had accepted the Charge and had promised all, he repeated the same injunction with an appeal to the same witnesses, and then departed for Ephesus. But the presbyter, taking home the youth committed to him, reared, kept, cherished, and finally baptized him. After this he relaxed his stricter care and watchfulness, with the idea that in putting upon him the seal of the Lord he had given him a perfect protection. But some youths of his own age, idle and dissolute, and accustomed to evil practices, corrupted him when he was thus prematurely freed from restraint. At first they enticed him by costly entertainments; then, when they went forth at night for robbery, they took him with them, and finally they demanded that he should unite with them in some greater crime. He gradually became accustomed to such practices, and on account of the positiveness of his character, leaving the right path, and taking the bit in his teeth like a hard-mouthed and powerful horse, he rushed the more violently down into the depths. And finally despairing of salvation in God, he no longer meditated what was insignificant, but having committed some great crime, since he was now lost once for all, he expected to suffer a like fate with the rest. Taking them, therefore, and forming a band of robbers, he became a bold bandit-chief, the most violent, most bloody, most cruel of them all. Time passed, and some necessity having arisen, they sent for John. But he, when he had set in order the other matters on account of which he had come, said, 'Come, O bishop, restore us the deposit which both I and Christ committed to thee, the church, over which thou presidest, being witness. But the bishop was at first confounded, thinking that he was falsely charged in regard to money which he had not received, and he could neither believe the accusation respecting what he had not, nor could he disbelieve John. But when he said, 'I demand the young man and the soul of the brother,' the old man, groaning deeply and at the same time bursting into tears, said, 'He is dead.' 'How and what kind of death?' 'He is dead to God,' he said; 'for he turned wicked and abandoned, and at last a robber. And now, instead of the church, he haunts the mountain with a band like himself.' But the Apostle rent his clothes, and beating his head with great lamentation, he said, 'A fine guard I left for a brother's soul! But let a horse be brought me, and let some one show me the way.' He rode away from the church just as he was, and coming to the place, he was taken prisoner by the robbers' outpost. He, however, neither fled nor made entreaty, but cried out, 'For this did I come; lead me to your captain.' The latter, meanwhile, was waiting, armed as he was. But when he recognized John approaching, he turned in shame to flee. But John, forgetting his age, pursued him with all his might, crying out, 'Why, my son, dost thou flee from me, thine own father, unarmed, aged? Pity me, my son; fear not; thou hast still hope of life. I will give account to Christ for thee. If need be, I will willingly endure thy death as the Lord suffered death for us. For thee will I give up my life. Stand, believe; Christ hath sent me.' And he, when he heard, first stopped and looked down; then he threw away his arms, and then trembled and wept bitterly. And when the old man approached, he embraced him, making confession with lamentations as he! was able, baptizing himself a second time with tears, and concealing only his right hand, But John, pledging himself, and assuring him on oath that he would find forgiveness with the Saviour, besought him, fell upon his knees, kissed his right hand itself as if now purified by repentance, and led him back to the church. And making intercession for him with copious prayers, and struggling together with him in continual fastings, and subduing his mind by various utterances, he did not depart, as they say, until he had restored him to the church, furnishing a great example of true repentance and a great proof of regeneration, a trophy of a visible resurrection." 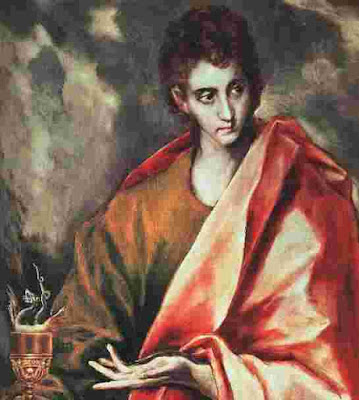 John is also called the Apostle of Charity, a virtue which is very much on our minds at this time of year. I will leave you with these words from John’s first epistle, which remind us why we remember him today:"Everyone who believes that Jesus is the Christ has been born of God, and everyone who loves the parent loves the child. By this we know that we love the children of God, when we love God and obey his commandments. For the love of God is this, that we obey his commandments. And his commandments are not burdensome, for whatever is born of God conquers the world. And this is the victory that conquers the world, our faith. Who is it that conquers the world but the one who believes that Jesus is the Son of God?"

Shed upon your Church, O Lord, the brightness of your light, that we, being illumined by the teaching of your apostle and evangelist John, may so walk in the light of your truth, that at length we may attain to the fullness of eternal life; through Jesus Christ our Lord, who lives and reigns with you and the Holy Spirit, one God, for ever and ever. Amen.
Posted by Padre Mickey at 6:58 AM