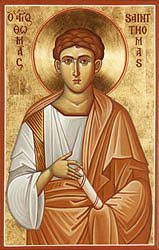 Everliving God, who strengthened your apostle Thomas with firm and certain faith in your Son’s resurrection: Grant us so perfectly and without doubt to believe in Jesus Christ, our Lord and our God, that our faith may never be found wanting in your sight; through him who lives and reigns with you and the Holy Spirit, one God, now and for ever. Amen.

Today is the feast of my favorite apostle, Thomas. I was ordained a priest on his Feast Day (well, it fell on a Sunday that year, so I was priested the next day, Dec. 22. Tomorrow is the twenty-third anniversary of my priesting.) and that was no accident. I think that he is the coolest apostle. Peter used to say anything that popped into his head; James and John, the Thunder Boys (thanks, Robbin!) were in the Inner Circle with Peter; Simon was either a Freedom Fighter or a Terrorist, depending upon your point of view; Andrew was the First Called and served as a liaison between Jesus and the other disciples; Matthew's gospel insured his fame, and the rest (and especially Mathias) were so boring that we don't know anything about them except that their names appear on lists. But Thomas, well, Thomas was kind of modern, in my opinion. He needed some proof before he was going to believe something. When Jesus appeared to the others in the Upper Room while Thomas was away, he didn't accept their story. He said he would believe when he touched Jesus' wounds. I've always thought that Thomas was treated unfairly by the Church, with them calling him "Doubting Thomas." He didn't really doubt; he didn't say "You guys are lying! I don't believe a word!" He just wanted some proof before he accepted the story. He spent a lot of time with those guys so I expect he knew them pretty well. Maybe he thought that they were inclined to jump to conclusions without thinking things through; we know Peter had that tendency. Maybe they used to play tricks on him. While the others were all locked away in the Upper Room, Thomas was away. I don't know what he was doing, but he certainly wasn't hiding in fear of the authorities. When Jesus appeared to those present in the Upper Room, they didn't recognize him until he showed them his wounds. Then they rejoiced. When Thomas showed up, they told him what happened and he delivered his famous line. A week later, Jesus appeared while Thomas was present. This time Jesus showed Thomas his wounds and even had Thomas touch them. What did Thomas say? Did he say, "I don't know, this all seems a bit strange"? Did he say, "Yuck! Why did you have me touch your wounds?" Did he say, "Are you really Jesus or is this some kind of sick joke?" No. He said, "My Master! My God!" Those don't sound like the words of a Doubter, of a Sceptic. No, those are the words of one who recognizes who Jesus is, those are the words of one who truly believes. Thomas was a good and faithful person; the fact that he wasn't cowering behind locked doors with the others says something about his character. It was Thomas who was willing to follow Jesus to Judea when Jesus wanted to see his friend Lazarus. The others were worried that Jesus' enemies would try to kill him. Thomas said, "Let us also go, that we may die with him." It was Thomas who, in John's version of the Last Supper, interrupts Jesus for some clarification, to ask: "Lord, we do not know where you are going. How can we know the way?" It isn't that Thomas didn't want to believe, he just wanted to believe for the right reasons, he didn't want to simply "jump on the bandwagon." I think that it is important to remember that nome of the others believed that Jesus was resurrected until Jesus showed them his wounds; they just saw Jesus before Thomas, it doesn't make them any better or more faithful. I love the Acts of Thomas and that wild story about Thomas' time in India, even though I'm sure it's a bunch of hooey, especially since Jesus sells Thomas to a slave trader so that Thomas would be a slave to the Raja of Malabar. I like the idea that Thomas went to India and started the Church there, but I doubt the veracity of most of those stories. However, I love the story in the Acts of Thomas (and can’t help but tell it) in which the Raja orders Thomas to build him the greatest and most beautiful palace in the world. Thomas tells the Raja that a building of such magnitude will be very expensive but the Raja really wants this building and gives Thomas lots of gold, which Thomas promptly takes and gives to the poor. When Thomas ran out of money, he asked the Raja for more, and the Raja gave him more, which he continued to distribute to the poor. When the Raja learned of what was going on, he called Thomas before him and demanded an accounting. Thomas told the Raja that he was building him a spectacular palace in heaven, and through mystic means of which we have no information, was able to show the Raja his palace in a vision. The Raja was so impressed that he converted to Christianity. A great story and another example of Thomas’ character. 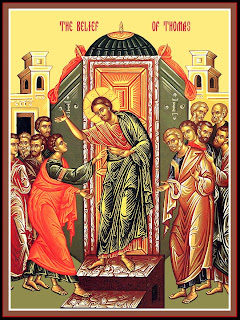 I think that the example of Thomas is an important and worthy example to Christians, because he didn't just accept things without looking in to them. We all know people who think that blind faith is important, but blind faith, a faith which is not based upon reason, will lead one into trouble. Way too many false Christs have led people astray because their followers refused to question, because they were afraid of their doubts. During my wayward youth, I spent some four years in a psuedo-Hindu meditation cult with a guru. We were told "never leave room for doubt in your mind" and "never question the purity of the master," but the "master" was a fraud and needed to be questioned! A true Master does not need to tell his followers not to doubt, because he does not see doubt as a threat to faith, but as a normal part of the spiritual process. Thomas wasn't hard to convince; when Jesus appeared to him and showed him his wounds, Thomas didn't debate with Jesus, he said "My Master! My God!" Peter and the Beloved Disciple didn't believe the women when they returned from the empty tomb and said that they had seen the Lord, and none of the disciples believed until Jesus showed them his wounds. God gave us large brains capable of reason and thought, and God expects us to use these brains even in spiritual matters. Questioning and study are all part of loving God with all our minds. Thomas and the women and the others all believed because they saw the Resurrected Jesus. The believed because they saw the and touched the nail marks. They believed because the Resurrected Jesus appeared in their midst and talked with them. Jesus said that we who believe without seeing are blessed, and Christians throughout the centuries and millennia have held on to the promise of that blessing, because we have no choice, really. We have believed without seeing. But I must admit, if I was given the choice of being blessed in that manner or actually seeing the risen Christ and touching the nail marks and putting my hand in his side, I would exchange places with Thomas in a heart beat!

This post was visited by the Alter Guild
Posted by Padre Mickey at 10:51 AM