O Lord, through spiritual discipline you strengthened your servant Monnica to persevere in offering her love and prayers and tears for the conversion of her husband and of Augustine their son: Deepen our devotion, we pray, and use us in accordance with your will to bring others, even our own kindred, to acknowledge Jesus Christ as Savior and Lord; who with you and the Holy Spirit lives and reigns, one God, for ever and ever. Amen.

Today is the feast of St. Monnica, an African Christian woman of the fourth century. She was the mother of St. Augustine, the great African Bishop, theologian, and heretic fighter. Her story is a good one, about a mother's love for her son, of her faith in God and her trust that her wild boy would return to the Lord. When St. Augustine first published his autobiographical Confessions the story he told of Monnica's faithfulness has been considered an inspiring tale of God's faithfulness in answering the prayer of his children.

Monnica was born in the year 332 in Tagaste, North Africa, in the area we now call the nation of Algeria. She was born into a reasonably well-off Christian family. She was known for having a strong will, and there is a story from her childhood which illustrates this will. She was sometimes sent down to the cellar to draw wine for the family, and fell into the habit of taking secret sips. Pretty soon she was sneaking more than sips, she was taking deep, long, drinks of wine while in the cellar. One day a family slave who had been spying on the little girl denounced her as a drunk, as a wine-bibber, and Monnica, covered with shame, stopped drinking any wine. (I have no idea if there were 12 steps up from the cellar). Not long after this episode she was baptized, and from all accounts lived a life of virtue from then on. Once Monnica reached marriageable age her parents arranged a marriage with a pagan named Patricius. Patricius had a violent temper and was also known to be a "man of dissolute habits." He did not approve of Monnica's faith, and his mother joined his in mocking her for praying and especially for giving alms and caring for the poor. She kept the traditions of the African church which were considered superstitious by many; she kept the Sabbath, or Saturday, as the Lord's Day, and she visited the graves of martyrs with food and drink. These activities drove her husband and mother-in-law crazy! It was not a happy marriage nor, with Patricius' temper, a happy household, but due to Monnica's patience and sweet disposition Patricius did begin to come around and eventually to revere and respect her. Monnica was not the only woman in such a situation, and many of the other women of Tagaste in similar situations held her in reverence and respected her words.

Monnica gave birth to three children: Augustine, the eldest, a second son named Navigius, and a daughter, Perpetua. Because of Patricius' disapproval of her faith, Monnica was unable to have her children baptized as babies, and she was distraught and frightened when young Augustine fell ill. She begged Patricius to let her have Augustine baptized, and he agreed, but then withdrew his consent when Augustine survived the illness. After this all of Monnica's anxiety seemed to rest upon Augustine, but her patience paid off when Patricius was baptized a year later. Of Monnica's three children, Augustine was the trouble maker. Navigius seems to have been an exemplary son, and Perpetua became a religious. Augustine, the most intelligent of the three, was sent to Carthage to become educated and to become a man of culture. Augustine enjoyed studying and was a good student, although he also admitted that he was somewhat lazy, but he also spent a lot of time carousing and drinking and even took a mistress or concubine. At the age of nineteen, much to his mother's horror, he rejected the Christianity of his mother and embraced Manichaeism, a group which historian Peter Brown called "the Bolsheviks of the fourth century." He returned home for some holiday break and, like college students have done for centuries, spent his time upsetting his parents espousing his new-found ideas (he probably brought a semester's worth of dirty laundry with him, too). Monnica became so upset at Augustine's defense of the teachings of Mani that one night she evicted him from the table (Go sit in the car, Auggie!). He was not welcome at home after that until Monnica had a vision which changed her mind. One day as she was weeping over his behavior, a figure appeared and asked her the cause of her grief. She told the stranger about her problem child; the mysterious figure told her to dry her tears, then she heard the words, "Your son is with you." Monnica told Augustine this story, and he replied that since it was her faith which kept them apart, she should give up Christianity. Quickly she retorted, "He did not say I was with you: he said that you were with me." Augustine was impressed by the quick answer and never forgot it. It was another nine years before Augustine would be converted, but Monnica did not lose faith. She continually fasted, prayed, and wept on his behalf. She implored the local bishop for help in winning him over, and he counseled her to be patient, saying, "God's time will come." Monnica persisted in begging him for his help, and the bishop said: "Go now, I beg you; it is not possible that the son of so many tears should perish."

When Augustine was twenty-nine years of age, he decided to move to Rome with his "wife" and son. Monnica was against the move, mostly because she thought he would never be converted if he lived in Rome, but she followed him and his family to the seaport and was planning to go to Rome with them. Once Augustine realized that she was planning to come with them, he told her that he wasn't leaving that day; he was waiting until the winds were right so that a friend of his could sail with them. He talked Monnica into spending the night in a shrine dedicated to St. Cyprian, and, that evening, while she was praying for him, he and his family set sail for Rome. Of course, Monnica was very upset the next morning when she learned that Augustine had given her the slip, but she didn't let it stop her, and she set sail on the next ship for Rome. The ship she took was caught in a storm, and the passengers were sure that they would die at sea, but Monnica's serene confidence in God and God's mercy cheered the passengers and they arrived in Rome safely. Once Monnica arrived in Rome she learned that Augustine had settled in Milan. While in Milan he came under the influence of Ambrose, the bishop of Milan, and had given up Manichaeism, but he wasn't a Christian yet. He had been experiencing major doubts, especially after spending time with Faustus, one of the shining lights of the Manichees, whom Augustine found less than inspiring. Monnica became a good friend of Ambrose, and, just as had been the case in Africa, she was foremost among women in her charity and her devotion to God. Bishop Ambrose was able to persuade her to give up some of the practices of the African church, especially that of visiting the graves of martyrs with food and wine. Under the influence of Ambrose, and in answer to Monnica's prayer, but most of all because of the grace of God, Augustine was converted and was baptized by Ambrose at the church of St. John the Baptist in Milan at the Easter Vigil of the year 387. Upon his conversion, he decided to end his relationship with his mistress, and Monnica was hoping to find an "appropriate" wife for Augustine, but upon the return of his mistress to Africa, he informed Monnica that he would adopt the celibate life and would devote himself to God's service.

Augustine had formed a small group of friends who were planning to adopt the religious life, and he and his mother and his friends decided to return to Tagaste. They spent some time at the seaport in Ostia, preparing to continue across the waters to Africa, when Monnica took ill. When Augustine and his brother realized that she would probably die, they were worried about burying her far from home. Augustine writes: I heard afterwards, too, that at the time we were at Ostia, with a maternal confidence she one day, when I was absent, was speaking with certain of my friends on the contemning of this life, and the blessing of death; and when they—amazed at the courage which You had given to her, a woman—asked her whether she did not dread leaving her body at such a distance from her own city, she replied, "Nothing is far to God; nor need I fear lest He should be ignorant at the end of the world of the place whence He is to raise me up." On the ninth day, then, of her sickness, the fifty-sixth year of her age, and the thirty-third of mine, was that religious and devout soul set free from the body.

One of the propers for today has this passage from John's Gospel, in which Jesus said, "You will grieve but your grief will turn to joy. A woman suffers pain when she gives birth because the time has come. When her child is born, in her joy she no longer remembers her labor because a human being has come into the world. . . I swear to God, if you ask the Father for anything using my name, he will grant it to you." 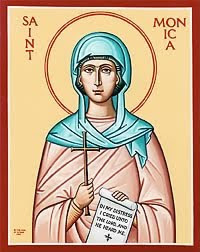 Monnica loved the Lord and she loved her children, and she especially loved Augustine and prayed for him. She prayed that he would give up his wild ways and return to the Lord. She did not desert her son but continued praying for him and the Lord answered her prayers. Monnica was happy because her son had accepted the Lord, but we can all be happy because the Christian Church received a great Doctor of the Church, a great Saint of Africa whose faith influences us to this day. Monnica's faithfulness gave the Church the blessing of Augustine, and the blessing of her faithful witness.
And that is why we remember her today.
Posted by Padre Mickey at 5:00 AM