Feast of Andrew, the First Called 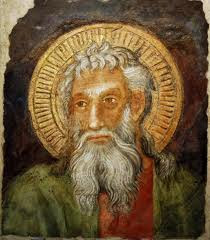 Almighty God, who gave such grace to your apostle Andrew that he readily obeyed the call of your Son Jesus Christ, and brought his brother with him: Give us, who are called by your holy Word, grace to follow him without delay, and to bring those near to us into his gracious presence; who lives and reigns with you and the Holy Spirit, one God, now and for ever. Amen.

As is usually the case with first century saints and especially with the Apostles, we don’t know much about Andrew. There are twelve passages in the New Testament which mention Andrew’s name. The passages from the synoptic gospels are two about Jesus calling Andrew and his brother Simon Peter, three which are what we may call the List of the Twelve, one which mentions Jesus entering Andrew and Peter’s home (to heal Peter’s mother-in-law so that she could make lunch), and one passage in which Andrew is with a few members of the Twelve who ask Jesus about the eschaton. But the Gospel of John contains four references to Andrew, and he plays a different role than that in the synoptics. He is the first person Jesus called to follow him; there is a reference to the city of Bethsaida being the city of Andrew and Peter; Andrew brings the little boy with the loaves and fishes to Jesus at that famous lunch, and Andrew also serves as an intermediary between Jesus and some Greeks who asked Philip to let them see Jesus to ask him some questions. The final biblical reference to Andrew is in the Acts of the Apostles where he is listed as one of those in the Upper Room. Eusebius’ only refers to Andrew as being assigned the area of Scythia for his missionary work. I read the Acts of Andrew, which is a book which was denounced by the Church Fathers (and by Eusebius), but tells some wild stories about Andrew. I’ve used some stories from the Acts of Andrew for this post, especially the description of Andrew’s martyrdom.

As I stated in the paragraph above, the Gospel of John claims that Andrew was at first a disciple of John the Baptizer. When John the Baptizer pointed out Jesus as the Christ, Andrew and another of John’s followers both became His disciples. Andrew took his brother, Simon, later to be called Peter, to meet Jesus. He is called the Protokletos (the First Called) in the Orthodox Church because he was the first Apostle to be summoned by Jesus into His service. In the accounts in the synoptic gospels, Andrew and his brother Peter made their living as fishermen on the Sea of Galilee and both dropped their nets and followed Jesus when he called them. Both men became Apostles, and while Peter, who was martyred in Rome, symbolically came to represent the Church of the West, Andrew, whose relics were transferred to Constantinople, likewise came to represent the Church of the East.

According to the traditions of the Church of the East, Andrew began his missionary activity in the Provinces of Bithynia and Pontus on the southern shores of the Black Sea. He then to the city of Byzantium and founded a church there, ordaining the first Bishop of Byzantium, Stachys, who was one of the 70 disciples Jesus sent out to heal the sick and proclaim the Good News. The Apostles began their missionary work after Pentecost. Andrew went to several cities and countries to teach, including Byzantium, Thrace, Russia, Epiros, and Peloponnese. In Amisos, he converted the Jews in the temple, baptized them, healed their sick, built a church, and left a priest for them (I don’t know if he was a priest who had been traveling with Andrew or a local person. Historically, there weren’t any priests in the Church yet). In Bithynia, he taught, healed their sick, and drove away the wild beasts that bothered the people. His prayers destroyed the pagan temples, and those who resisted his words became possessed and gnawed at their bodies until Andrew healed them. Many of the stories about Andrew seem to deal with demon possession. According to the Acts of Andrew, he visited the City of Patras during one of his several missionary journeys to Greece. Through his preaching and the miracles of healing he performed in the name of Jesus, many persons were converted to Christianity. Among those healed was Maximilla, the wife of the Roman Proconsul, Aegeates. Seeing this miracle of healing, Stratoklis, the highly intellectual brother of the Proconsul, also became a Christian, and Andrew consecrated and enthroned him as the first Bishop of Patras. As a prophet, he foretold of the greatness of Kiev as a city and a stronghold of Christianity. In Sinope, he prayed for the imprisoned Apostle Matthias, and his chains fell from him and the cell door opened. This angered the people and they beat Andrew, breaking his teeth, cutting his fingers, and left him for dead in a dung heap. While Andrew was lying in the dung heap Jesus appeared to him and healed him, telling him to be of good cheer. When the people saw him up and around with all his teeth and fingers the next day, they were amazed and they converted. Another time, he raised a woman's only son from the dead. All this activity made the people of Patras and Sinope and Kiev love him, but it did not endear him to those in power, of course. According to the Acts of Andrew, the conversions to the Christian Faith by members of his own family infuriated the Proconsul Aegeates, and he decided, with the urging of his pagan advisors, to crucify Andrew. The crucifixion was carried out on an X-shaped cross with the body of the Apostle upside down so that he saw neither the earth nor his executioners, but only the sky, which he “glorified as the heaven in which he would meet his Lord.” Aegeates had him tied to the cross in this manner so that he would live longer and suffer more. According to the account in the Acts of Andrew, the Apostle went to the cross “and spake unto it as unto a living creature, with a loud voice (and in Elizabethan english!): Hail, O cross, yea be glad indeed! Well know I that thou shalt henceforth be at rest, thou that hast for a long time been wearied, being set up and awaiting me. I come unto thee whom I know to belong to me. I come unto thee that hast yearned after me. I know thy mystery, for the which thou art set up: for thou art planted in the world to establish the things that are unstable: and the one part of thee stretcheth up toward heaven that thou mayest signify the heavenly word: and another part of thee is spread out to the right hand and the left that it may put to flight the envious and adverse power of the evil one, and gather into one the things that are scattered abroad: And another part of thee is planted in the earth, and securely set in the depth, that thou mayest join the things that are in the earth and that are under the earth unto the heavenly things. O cross, device of the salvation of the Most High! O cross, trophy of the victory of Christ over the enemies! O cross, planted upon the earth and having thy fruit in the heavens! O name of the cross, filled with all things. Well done, O cross, that hast bound down the circumference of the world! Well done, O shape of understanding that hast shaped the shapeless! Well done, O unseen chastisement that sorely chastisest the substance of the knowledge that hath many gods, and drivest out from among mankind him that devised it! Well done, thou that didst clothe thyself with the Lord, and didst bear the thief as a fruit, and didst call the apostle to repentance, and didst not refuse to accept us! But how long delay I, speaking thus, and embrace not the cross, that by the cross I may be made alive, and by the cross win the common death of all and depart out of life? Come hither ye ministers of joy unto me, ye servants of Aegeates: accomplish the desire of us both, and bind the lamb unto the wood of suffering, the man unto the maker, the soul unto the Saviour. 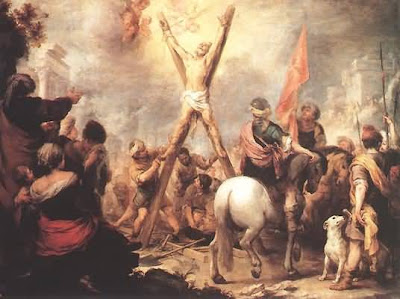 Twenty thousand of the faithful stood by and mourned. Even then, Andrew taught them and exhorted them to endure temporary sufferings for the kingdom of heaven. Out of fear of the people, Aegeates came to remove Andrew from the cross. Andrew, however, told Aegeates that there was still a chance for Aegeates to become a Christian, but that he (Andrew) had already seen Jesus waiting for him and he would not allow himself to be removed from the cross. Many tried to undo the knots, but their hands all became numb. Suddenly, a heavenly light illumined Andrew for about a half hour. When it left, Andrew had given up his spirit. His body was tenderly removed from the cross by Bishop Stratoklis and Maximilla, and buried with all of the honor befitting the Apostle. Soon countless numbers of Christians made their way to Patras to pay reverence to the grave of Andrew, and when Aegeates realized that the man he had put to death was truly a holy man of God a demon fell upon him and tormented him so powerfully that he committed suicide (In many of these non-canonical books, the one who had someone martyred would commit suicide or explode or fall dead for no reason, as a way of avenging the death of the martyr).

The actual historical record tells us that in the month of March in the year 357 the Emperor Constantine (son of Constantine The Great) ordered that the body of Saint Andrew be removed from Patras and be reinterred in the Church of the Holy Apostles in Constantinople. This was a church built by Constantine the Great, and he had wanted to have the relics or remains of all twelve apostles interred in this church along with his own body. This is because the Christians of that era believed that there was great spiritual power contained in the bones of the Apostles and other martyrs, and to have the relic of an apostle or martyr in the altar made the church a center of great spiritual power. St. Andrew’s bones were returned to the very city which had first heard the Good News from Andrew’s own lips, and with all the pomp and honor and liturgical magnificence of the Byzantine Empire, they were laid in the Great Church of Christ at Constantinople. There is a tradition that some of his relics were taken to Scotland. The skull of Andrew was kept in Patras until the year 1460 when Thomas Paleologos, the last ruler of the Morea, brought the skull to Rome. In 1967, under the orders of Pope Paul, the skull was returned to Patras. He is the Patron Saint of Fishermen and the Patron Saint of Russia, Scotland, and Romania. So, today let us remember and celebrate the ministry and example of Saint Andrew, who continues to call on all Christians to tell others just what he told his brother Simon Peter: “We have found the Messiah!”
Posted by Padre Mickey at 10:09 AM