It's Red Mr. Peanut Bank and Gallito Mescalito's Annual Thanksgiving Special! The commercial interruptions have been removed as they are too old to work.

It is the Holiday Season! While the Patriotic Holidays start the season in Panamá, we are now in los Estados Unidos, where the season starts with Thanksgiving, so we're following the local traditions. And what goes with the Holiday Season, besides lots of good food and drink and stuff? That's right: re-runs Holiday Season Classics! And here at Padre Mickey's Dance Party we have our Holiday Season Classics, just like your favorite television station, the only difference being ours aren't thirty to forty years old, and none of the characters appear as balloons in the Macy's Thanksgiving Parade. So just sit back and enjoy It's A Red Mr. Peanut Bank And Gallito Mescalito Thanksgiving, Charlie Brown!And, since you haven't seen our crew in ages, I'm sure you're gonna enjoy it! 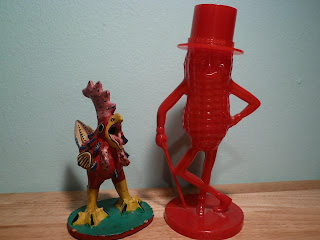 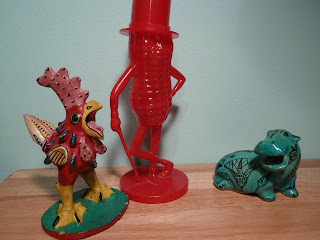 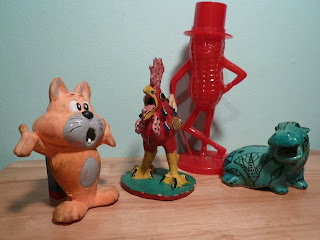 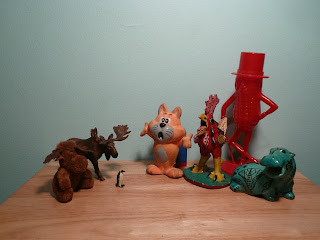 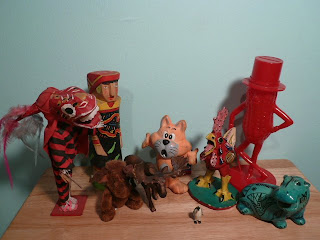 Diablito Sucio y Wooden Kuna Doll Si. ¿Es este fiesta más importante qué la Día de Independencia de España? ¿Por qué?
Mr. Chompy's Chewed-up Squeaky Kitty Toy Yeah, I'm wunderin' 'bout dis, too. Is dis anuver one of yer Gringo "weah betteah dan you" tings?
Gallito Mescalito ¡Shriek!
Los Juegetes de los estados unidos No! It's just different!!!
Red Mr. Peanut Bank No, no, no! It's not more important than Panamanian holidays; it's just different. It is an important holiday to the Lovely Mona and Padre and their extended family and the estadoünidense toys and knick-knacks because they like the idea of taking one specific day to thank God for their many blessings, and because it is an important part of the mythology of the U.S.A., not that Padre and the Lovely Mona buy the myth (although they both have family members who are participants in the story!).
Las Jugetes Panamañas What is the myth? Tell us, TELL US!!! 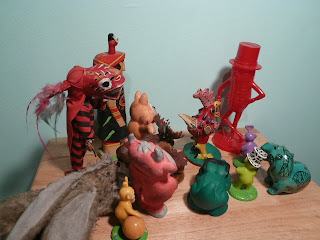 Red Mr. Peanut Bank Well, it all started with the Puritans Pilgrims and their search for a land in which they could oppress others find religious freedom. . .
The commercial break that was once in this spot has been removed as it is no longer functional.
Also, there are way too many Christmas commercials on my televisor, even though it isn't even Advent yet. Heathens!
Before the break which was guaranteed to offend EVERYONE!, Red Mr. Peanut Bank promised to tell Padre Mickey's twisted, totally warped enlightened version of the Myth of the First Thanksgiving. As we would never want a toy bank to go back on Padre's its word, we now present Padre Mickey's Dance Party's Friday Red Mr. Peanut Bank and Gallito Mescalito Blogging Players in The First Thanksgiving
Narrator Once upon a time, several centuries ago, there was a group living in England, who, having been driven insane by the more fringe elements of the Protestant Reformation, decided that everyone in England must believe as did they, be as pure as were they, and be just as grumpy. They were known as Puritans The majority of Believers in England disagreed, and made life even more miserable for these folks, until they finally left England for the Netherlands, where, soon tiring of a diet of chocolate, edam, and tulips, they made their way to The New World to make life miserable for Padre Mickey's relatives. Europe's favorite population decimator, small pox, had already cleared the way for the Pilgrims (as they were now called) so that there was plenty of room! Landing in an area they named Plymouth, after the place from which they had been evicted, their leader gave thanks to God. . . 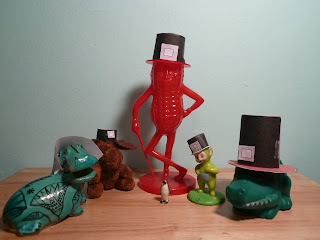 Red Mr. Peanut Bank Now thank we all our God, with hearts and hands and voices, that we have arrived  safely in this heathen, yet almost empty land, where we are free to worship God in our own manner, and may make sure that everyone else worships God in our own manner, too!
Other Pilgrims Amen!
Narrator The Pilgrims soon met the indigenous inhabitants of the land. . . 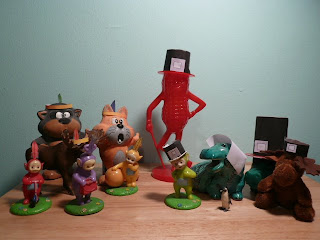 Chompy's Chewed-up Squeaky Kitty Toy Hey dere, peoples wut don' look nuffin' like us! Watcha up to?
Red Mr. Peanut Bank We are the Pilgrims, and we have come to this nearly empty land to live in peace and worship our God in our own manner. We are trying to plant our crops. And what is your name, almost naked guy? And why are you wearing that feather?
Chompy's Chewed-up Squeaky Kitty Toy My name is Tisquantum, but you kin' call me Squanto. An' I weahs a feddah cuz it looks much coolah dan dat ting on toppa yer head! Uhm, ya know, dem seeds won't grow in dis climate. 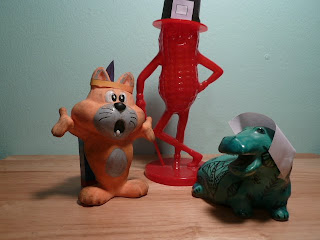 Miss Egyptian Hippo of Love And how did you learn our tongue? Hast the Holy Spirit descended upon you to give you this gift? I doubt it, you being such a heathen savage!
Chompy's Chewed-up Squeaky Kitty Toy No, no Espíritu Santo. Sum sumbich white guy captured me and my friends Manida, Skidwarres, Nahanada and Assacumet a while back n' dragged us kickin' an screamin' in a big nasty boat to your pitiful island and taught us yer funny langige. But, like I sed, dem seeds won't grow in dis climate. . .
Miss Egyptian Hippo of Love Sir, these are the seeds our God commanded us to bring and plant!
Chompy's Chewed-up Squeaky Kitty Toy Well, dat's too bad 'cuz dey ain't gunna woik heah. Hey! Massasoit! Go grab some maize and some fish. Let's show dese rubes howta do it, or dey gonna starve and be botherin' us all wintah for food!
Narrator And so Squanto and Massasoit and their people taught the Pilgrims how to plant corn and squash and pole beans and which nuts were safe to eat. . . 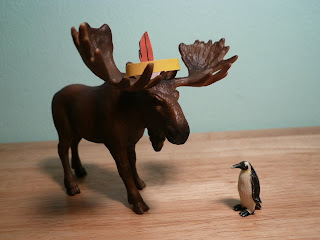 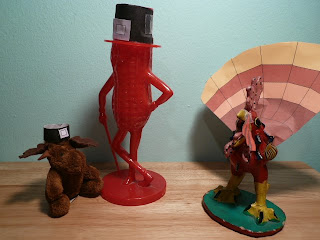 Fuzzy Southern Mountain Moose An weyul invaht Squanto an' hiyus friens', too, as theyah wuah SUCH a biyguh haylp!
Red Mr. Peanut Bank That's a great idea. What will be the main course? We don't have any cattle for roast beef, and they eat venison all the time.
Gallito Mescalito Shrie--cough, cough--er, gobble gobble!
Fuzzy Southern Mountain Moose Hmm, thayut maht be reyul good!
Red Mr. Peanut Bank Er, how about pumpkin soup in the pumpkin? That could be Very Elegant!
Once again, the commercial has been removed due to the fact that it no longer functions.
Kinda messes up the joke, but, that's life!
Announcer And now, we return to It's A Red Mr. Peanut Bank and Gallito Mescalito Thanksgiving, Charlie Brown! already in progress. . . 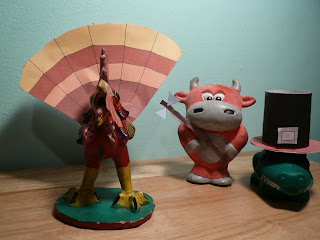 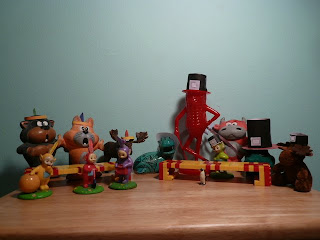 Red Mr. Peanut Bank Well, we're gathered together to ask the Lord's blessing, you at your table and we at ours, as we really can't be mixing with the likes of you. You know, He, the Lord, hastens and chastens, His will to make known!
Chompy's Chewed-up Squeaky Kitty Toy Really! Well, ya know, we gots a little diff'rint teolugie an' understandin' of da Great Spirit! Ya see, WE believes dat. . .
Red Mr. Peanut Bank No one wants to hear your heathen ideas! We came here to worship God in OUR OWN MANNER, and we expect everyone else to worship God in our own manner, too! Now eat your pumpkin soup!
Narrator' And everyone gave thanks to God, with heart and hands and voices, and ate and had a wonderful time. 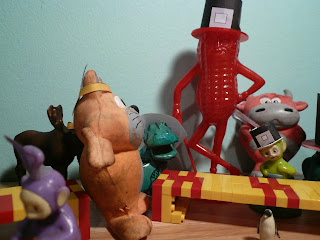 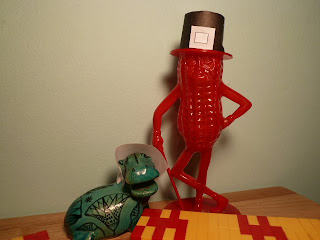 Miss Egyptian Hippo of Love What hath the Lord in store next for the Pilgrims in His Divine Plan?
Red Mr. Peanut Bank Well, we survived our first year and survived dinner with the Heathen Savages. Now it's time to get to work! Time to start taking their land and pushing their sorry heathen bottoms West until they can go West no further! 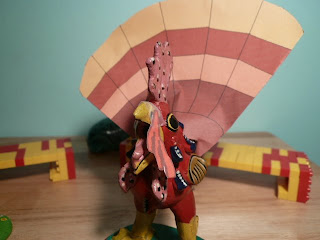 Happy Thanksgiving! I love the Mr. Red Peanuts! So cute！