Feast of St. Clare of Assisi 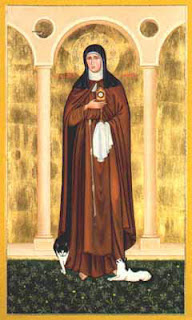 O God, whose blessed Son became poor that we through his poverty might be rich: Deliver us, we pray thee, from an inordinate love of this world, that, inspired by the devotion of thy servant Clare, we may serve thee with singleness of heart, and attain to the riches of the age to come; through Jesus Christ our Lord, who liveth and reigneth with thee, in the unity of the Holy Spirit, one God, now and for ever. Amen.

Clare Offreduccio, born in 1194, was the daughter of a wealthy family in Assisi. Her father is said to have been Favorino Scifi, Count of Sasso-Rosso. Her mother was to become Blessed Ortolana di Fiumi. There is little information about Clare's immediate family or her childhood. We do know that at age eighteen she heard St. Francis give the Lenten sermons at St. George’s Church in Assisi, and she was so touched by his message that she wanted to change the entire course of her life. Being the daughter of a Count she was expected to marry into another aristocratic family, but, possibly to avoid an unwanted proposal of marriage, she snuck off to see St. Francis at San Dominano and asked him to help her live “after the manner of the Holy Gospel.” Francis and Clare had many conversations and became good friends, but they were not sure how to carry out her wish. On Palm Sunday of the year 1212, Clare attended the Liturgy of the Palms with her family at the Cathedral of Assisi. When everyone else went up to the altar rail to receive their palm branch, Clare’s shyness kept her back. The bishop noticed this beautiful, shy, young woman and came down from the altar to give her a branch. Clare took this act as a sign of God’s approval of her desire to become a nun. The next evening she slipped out of the house and went to the chapel of the Portiuncula, where Francis and his small community were living. Francis and his brother monks had been at prayers before the altar and they met Clare at the door. Clare told Francis that she wanted to live like Francis and the monks, and, standing before the altar of the Blessed Virgin, Francis sheared her hair, and gave Clare his own penitential habit, a tunic of coarse cloth tied with a cord. Then, since he had no nunnery, he took her at once for safety to the Benedictine convent of Saint Paul, where she was affectionately welcomed. When her family and friends found out what Clare had done,they were less than pleased. Actually, they reacted the very same way we might if our children joined a crazy religious cult: they went to the Convent of St. Paul and tried to rescue her. When they tried to drag her from the convent church, she held on to the altar and refused to budge. Her family and friends kept pulling on her and she continued to cling to the altar, and finally (before the struggles would pull the cloths off the altar), Clare pulled the cloth off of her head and exposed her shorn hair. She declared that Christ had called her to his service and that she would have no other spouse but Christ, and that the more they persecuted her the more steadfast she would become. They finally left her, but did continue to try to convince her to return home. After this event, Francis moved Clare to the nunnery of Sant' Angelo di Panzo, where, to make matters worse, Clares’ fourteen-year-old sister, Agnes, joined her. This, of course, made the family even more upset and they renewed their attempts to get the girls to come home and get married, but even though (or maybe because) Agnes was young, she was headstrong and determined, and Francis eventually gave her the habit, too. Sometime later, Francis placed both girls in a small and humble house next to the church of San Dominano, on the outskirts of Assisi where he had his Order housed.

In 1215, three years after Clare had taken the habit, when she was about twenty-two years of age, Francis appointed her superior of her Order and gave her his rule to live by. She was soon joined by her mother and several other women, making a total of sixteen. They all felt the strong call of poverty, and without regret gave up their titles and estates to join Clare's humble disciples. Within a few years similar convents were founded in the Italian cities of Perugia, Padua, Rome, Venice, Mantua, Bologna, Milan, Siena, and Pisa, and also in various parts of France and Germany. The King of Bohemia’s daughter, Agnes, established a nunnery of this order in Prague, and took the habit herself. The "Poor Clares," as the Order was known, went barefoot, slept on the ground, observed a perpetual abstinence from meat, and spoke only when obliged to do so by necessity or charity. Clare herself considered this silence desirable to avoid the innumerable sins of the tongue, and to keep the mind steadily fixed on God. Clare governed the convent continuously from the day when Francis appointed her abbess until her death, a period of nearly forty years. She governed the convent in the manner in which Jesus said we are to do things. Even though she occupied a position of power and authority, she did not “lord it over them like the Gentiles do;” Clare always worked to serve the rest of her sisters. She served at table, tended the sick, washed and kissed the feet of her sisters when they returned with their feet sore from begging all over town. After caring for the sick and praying for them, she often had other sisters give them furthur care, so that their recovery might not be attributed to any prayers or merits on Clare’s part. She would get up in the middle of the night and put back the blankets on those sisters who had kicked them off during the night, and she was the first to rise in the morning to ring the bell and light the candles. It was said that she would come away from prayer with radiant face.

The power and effacacy of her prayers and the depth of her trust in Christ are illustrated by a story told by Thomas of Celano, a contemporary. In 1244, Emperor Frederick II, then at war with the Pope, was ravaging the valley of Spoleto, which was part of the Pope’s lands. He had come with his troops to attack and plunder Assisi. Their first targets were the Church of San Dominano and the convent, because they were outside of the protection of the city walls. While the marauders were laying ladders against the convent walls and beginning to climb them, Clare, who was ill and bed-ridden, had herself carried out to the gate and there set a monstrance containing the Sacrament in sight of the enemy. Prostrating herself before it, she prayed in a loud voice so that the soldiers could hear: "Does it please Thee, O God, to deliver into the hands of these beasts the defenseless children whom I have nourished with Thy love? I beseech Thee, good Lord, protect these whom now I am not able to protect." She then heard a voice like the voice of a little child saying, "I will have them always in My care." She prayed again, for the city, and again the voice came, reassuring her. She then turned to the trembling nuns and said, "Have no fear, little daughters; trust in Jesus." At this, the soldiers were seized with a sudden terror and they ran away. Shortly afterward one of Frederick's generals laid siege to Assisi. When she heard of this, Clare told her nuns that they, who had received all support and charity from the city, now owed the city any assistance that they had in their power. They all covered their heads with ashes and prayed to Christ for the safety of the city. For a whole day and night they prayed with all their might- and with many tears, and then "God in his mercy so made issue with temptation that the besiegers melted away and their proud leader with them, for all he had sworn an oath to take the city."

Clare was not very healthy, and her final illness began to take its toll during the Summer of 1253. She was too ill to attend Mass, so, through the use of mirrors,an image of the service was displayed on the wall of her cell; it is because of this story that Pope Pius XII made her the Patron Saint of Television in 1958 (I know you've all been wondering who got that job)! She had many visitors, and even Pope Innocent IV came to Assisi to give her absolution, remarking, "Would to God I had so little need of it!" Her sister Agnes was with her, as well as three of the early companions of Francis: Brother Leo, Brother Angelo, and Brother Juniper. They read aloud the Passion according to Saint John, as they had read it at the death-bed of Francis twenty-seven years before.

Clare died on August 11, 1253. Pope Innocent IV and his cardinals assisted at Clare’s funeral. Pope Innocent wanted to canonize Clare, in fact, he wanted to make her a Saint right away, but the cardinals who were there advised against it. His successor, Alexander IV, canonized her two years later in 1255. Her body, which lay first in the church of Saint George in Assisi, was moved to a stately church built to receive it in 1260. Nearly six hundred years later, in 1850, it was discovered, embalmed and intact, deep down beneath the high altar, and subsequently removed to a new shrine in the crypt, where, lying in a glass case, it may still be seen. Clare’s devotion to Christ and to St. Francis’ message of Holy Poverty led to the growth of the Order of the Poor Clares and their good work. Today there are houses of the order in North and South America, Palestine, Ireland, England, as well as throughout Europe.

St. Clare loved Jesus and the message of the Gospel, and she had a great trust in God’s capacity to love and care for his children. So great was her joy in serving the Lord that she once exclaimed: "They say that we are too poor, but can a heart which possesses the infinite God be truly called poor? We should remember this miracle of the Blessed Sacrament when in Church. Then we will pray with great Faith to Jesus in the Holy Eucharist: "Save me, O Lord, from every evil - of soul and body." She, like St. Laurence, whose feast we celebrated yesterday, saw the poor as the "great treasure of our God." May Clare's life be an example for us all.
Posted by Padre Mickey at 7:39 AM

So very beautiful! Thank you.

Wonderful as always, Padre; blessing and peace of Jesus.