DivaJood Says I Gotsta Get A Gown Now 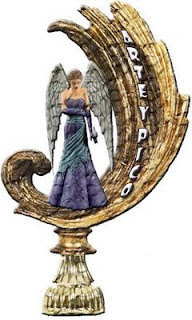 Well, I was shocked this morning when I read an email from FranIAm telling me that she had a gift for me over at her blog. The gift is this award from Arte y Pico (pictured to the left), a blog from Uruguay (it translates to Art and Some). FranIAm is very kind and said This man has an amazing blog that is at once, funny, outrageous, spiritual and profane in its own Friday Red Mr. Peanut Bank Gallito Mescalito sort of way.

In a word - he is arte y pico, muy picante. Well I guess that is more than one word...

So, as is normal with such internetty thangs, There Are Rules:
1)Pick five (5) blogs that you consider deserve this award for their creativity, design, interesting material, and also for contributing to the blogging community, no matter what language.

2) Each award has to have the name of the author and also a link to his or her blog to be visited by everyone.

3) Each award winner has to show the award and put the name and link to the blog that has given her or him the award itself.

4) Award-winner and the one who has given the prize have to show the link of “Arte y Pico” blog, so everyone will know the origin of this award which is here: Arte y Pico.

I read a lot of blogs every single day, and I read them because I love each and every one of them. It's very hard to choose only five blogs, as the majority of the blogs I read are creative with interesting material, and some even have creative design. Since I had to chose someone, I've chosen these five, but I wish I could give the award to everyone.

1. Revda. Elizabeth Kaeton and her blog Telling Secrets. She has really been on a roll lately and I've really enjoyed reading her blog every day. I can't believe she has time to blog with all the priesty-stuff she's doing. She is creative, spiritual, and has a great sense of humour, too.

2. He's only had his blog for a few weeks, but Counterlight’s (F. Douglas Blanchard) Rants and Blather is a favorite. Lotsa Arty Stuff, man!

3. Faddah Paul's Byzigenous Buddhapalian. He's always been creative, but he's been making his own illustrations for every post, not surfing about the web nicking everything of interest like I do. Heavy on the political stuff, which I love, yet full of spiritual and creative stuff, too.

4. He probably won't accept the award, but I'm going to give it to him anyway. Revdo. Jonathan, the notorious Mad Priest's blog Of Course I Could Be Wrong is fully of funny, creative, profane, and thought-provoking (and fight-provoking!) content. He is the King of the Photoshop Cartoon. He is so beloved that when he goes on vacation people set-up another version of his blog! He was the first to add me to his blogroll, but that's not why I'm giving him this award. i just want to see if he'll accept it or even acknowledge it!

5. Finally, Our Dear pj of PJ's Pointless Blog. I don't think it's pointless; it's GENIUS. Read today's post if you don't believe me. She can really write and she is hilarious.

Thanks again, FranIAm!
Posted by Padre Mickey at 2:55 PM

Oh sheesh, Padre. Thank you. Coming from you, this is a huge honor. Wait, I feel a shriek coming on.

That was three shrieks and a humble genuflection. I am not worthy.

Humbled, humbled I am to be in such great company.

You do my humble iMac more honor than it can bear.
I bow before greatness.

Oh you have made some brilliant choices and included ones that I struggled with when making my decision, so many amazing blogs.

And who knew Counterlight had a blog?!

No one could match the Friday night brilliance here! Talk about creativity... I mean, really.

Pater, non sum dignus. I shall try to gather my wits and acknowledge this great honor. To be in such awesome company is rather overwhelming.

And good news: I have more NOLA pics (unless you've had your fill and this is a warning of not-so-god news). Will take me a while to post; the rum needs to take effect first.

Hurrah for all of you! Thanks for all the great reading, and the laughs!

Gratefully acknowledged, but not accepted.

I have a few arbitrary but strict rules in life which I can use whenever I am accused of being amoral or unbiblical. These reason I chose these rules was because I could not foresee any circumstance in which I might have to actually adhere to them. For example I have never, in my whole life, been given an award or honour - it's not the sort of thing that happens to me. However, your gracious gesture has changed all that and I now have to get to get used to the pain and desolation of having to refuse something I could crow about for many, many years. Thank you, you missionary b*st*rd.