For the next three days, three different versions of the Tale of the Flaming Pudding Toss (an actual event) will be posted. We start with Padre's version:

Sit down, my child, and Padre will tell you the story of the Flaming Pudding Toss. 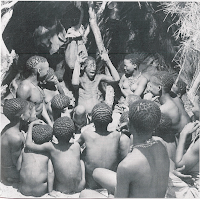 Once upon a time, long ago, probably around 1982, the family all gathered for Christmas at Aunt Sally's place in the Santa Cruz Mountains. Not the last place she lived in, and not the place in Scotts Valley; the OTHER place. Yes, it was a kinda suburban track home.

Now, Padre's mother is a bit of an Anglophile. Well, she's into her Celtic heritage, too. She be a white woman. And while Padre is more proud of his Shoshone and Lakota heritage, he loves him dem Celts, también. But Gramma Connie is into that English-Irish-Scottish stuff. She was REALLY into it back then in the 80's.

As I said, the Johnson side of the family had all gathered at Aunt Sally's for Krispen, as Aunt Sally herself called Christmas when she was a little, tiny girl, and, in the family tradition, was never allowed to forget it. Aunt Sally and Uncle, er, what was his name? Cripes, I can't remember! Well, heck, he ain't my uncle now; John is my uncle! Although I still consider Former Uncle Nameless' kids as my cousins, cuz they were cool. Well, let's see, Aunt Manny and Uncle Kenny were there, Aunt Cella and Uncle Steve, cousins Matty and Josh, and Chandra and Andy. Oh yeah, and Great-gramma Johnson. Uncle Sammy and cousin Heathery-poo were there. I think that was everyone. Aunty Margie and Uncle Wes may have been there, which would mean cousins Marky and Kenny would be there, too, but it's been a long time and Padre's memory is fading, unless he's thinking about the theological issues of the fourth century. Oh yeah, he's GREAT with that stuff but can't remember who was at Christmas in 1982. Sheesh! And, of course, Padre, the Lovely Mona, and little Tara and Anne were there, too. 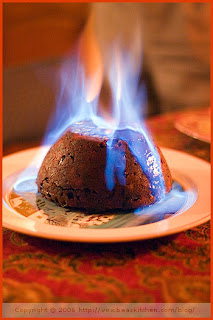 We had a wonderful meal; lots of good food, and the children opened presents, and oh, what a wonderful Christmas it was! Gramma Connie had prepared a lovely Plum Pudding (Gramma Connie can bake like nobody's bizness!). And, as is normal with any foody and creative cook, she wanted the presentation To Be Perfect (we were all unaware of Martha Stewart, and quite happy about it, I might add!). Grampa Jim splashed some clear rum on the pudding. Gramma Connie splashed some clear rum on the pudding. Aunt Sally splashed some clear rum on the plum pudding. I don't think any of them had discussed this rum-splashing with the others. Then, Gramma Connie artistically placed the holly on the pudding, Grampa Jim lit the rum, and, with it all flaming, our hostess, Aunt Sally, slowly walked into the living room carrying the pudding-laden platter into the living room while we all sang, Now bring us some figgy pudding, now bring us some figgy pudding, now bring us some . . .OH MY GOD!!!! Flaming rum was dripping off of the platter and onto the shag carpeting, onto the over-stuffed furniture, and bursting into little fires! The adults screamed, the babies wailed, and, Aunt Sally, trying to balance the entire flaming mess, suddenly poured the pudding onto the carpet, where it burst into even higher flames!! Grampa Jim, being composed and cool as always, kicked the flaming pudding from the living room back into the kitchen, from which this hellish dessert had first emerged! It skidded across the carpet, leaving a flaming trail, then across the kitchen floor, smashing into the wallboard at the sink. Those of us in the living room were stamping out fires and comforting weeping children, whilst laughing hysterically. Then, as she is wont to do, Gramma Connie went into the kitchen, picked up the pudding, which was no longer flaming, put it under the faucet, patted it dry with paper towels, then, replacing it on the platter, brought it out and said, "Who wants plum pudding?" Many passed on dessert that year.

And that, my child, is the tale of the Flaming Pudding Toss, which has been told every year ever since that fatal Krispen.

Tomorrow: the Lovely Mona's version
Posted by Padre Mickey at 7:19 AM

Think we need a little more dynamite there, Butch?

My tummy hurts from laughing so much!

In 1982 I was 18, so I guess that I would not have been too frightened. I am glad that my family has not embraced our celtic roots beyond keeping the name!

So is cousin Matty then, Matty Boy now, or are they not one and the same?

BTW, how did you get so many naked Panameños to sit there and listen to your story?

David, Cousin Matt is not the same person as Matty Boy; Matty Boy is uncle to the Dresbabies and a member of the extended family. Cousin Matt is part of the Johnson clan and also known as Cousin Sharky and lives in Hawaii.

Naked people are always willing to sit and listen to a good story. . .

I laughed and laughed at this story of the flaming pudding. I thought kicking it into the kitchen was an especially vivid picture. Thanks for sharing (and yes, I believe I will pass on the pudding!)
Christmas blessings to you and Mona and the fam!
Jeanne and Tom

So... how do you keep up the tradition? It's a strong argument for changing the location every year.

I laughed with such shaking that Her Grace the feline bishop came in from the other room with a quizzical look on her face and a big "mroww?"

Oh, God, I spewed my chicken pot pie on the computer, I was laughing so hard. Never NEVER make a pathologist spew food in the workplace, it looks too much like I have left surgical specmens on the desk now!

I would have eatin that puddin. No doubt. Me loves kicked puddin. The very best.

Especially with hard sauce, after the rum burns off. YUM!

I read with laughter and horror whilst picturing the dribbles of fire all over the living room! I await with 'bated breff Mona's version!